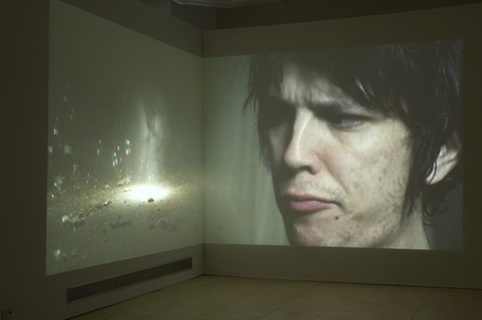 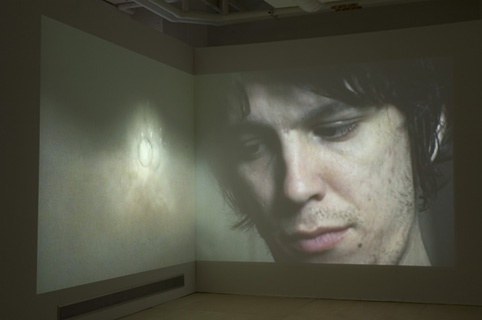 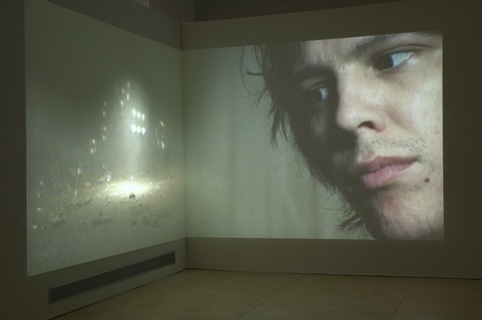 The video installation Werther consists of two projections, projected adjacent to each other at a 90-degree angle. On one side is a video with bubbles and smoke blowing in dark rubble floored basement lit only by a single light that casts a circle on the floor. It is a seamless loop of subtle beauty and a sense of loss, two common party machines blowing against each other and magically transforming the basement into a lunar landscape that is so foreign yet familiar. Bubbles float into the cone of light, and drop in its center with a tiny explosion before they disappear. A big smoke cloud blows in, diffuses the light, bounces off the bubbles, and dissolves into wisps floating away before the space is still again. This might be the place that the young man’s face in the other projection is yearning for. His expression is ever changing and intense. Watching him is to witness an intimate moment; he is unguarded, not playing to the camera, completely within himself. He grimaces, closes his eyes, glances over to the space next to him, his mouth twitches, and he raises his head.

The installation as a whole is silent. (Selina Trepp, 2007) Selina Trepp is a recent graduate of the art and design graduate program at the University of Illinois at Chicago and has also performed with various rock bands and musicians. Her work Werther is a two-channel video projection. One projection is a close-up of the face of young rock musician Emmett Kelly. He is playing the guitar, but one only sees Kelly's face (the guitar is never visible and the installation as a whole is silent) and its various enigmatic expressions. The other projection is is a smoke machine and a bubble machine smoking and bubbling underneath a spotlight on a rough dirt ground. Trepp manipulated the footage slightly to create an environment in which the face and the bubbles are in the same space. (Dominic Molon, 2007)